alright well i still cant find my post of united arsenal in 99
but this is something i submitted to a competition. its all by me

It took centuries to build the roman empires, but Manchester United destroyed it in 90 minutes. After what Rio Ferdinand had hailed as the most satisfying loss of his career, 10 man United had returned from Rome outplayed and bruised, yet with the vital away goal from the determination of Wayne Rooney. It was up to United now to make their home advantage count as Roma step foot on the Old Trafford pitch.

Mind games were played, Roma captain Francesco Totti said Fergie would rue the day he stepped on the Old Trafford pitch and their chairman laughed off the threats of Ronaldo, identifying the world will remember the name Totti.

The night before the game and my mates asked me for my two cents, I had that strange feeling we would destroy them, but to avoid any controversy I said we would win 1-0 with an early goal. The Game started, and with injuries to Gary Neville, Louis Saha, Nemanja Vidic and a half fit Patrice Evra adding to the suspension of Paul Scholes and the end of Henrik Larssons spell at United caused concerns, but a shift in the line up of O’Shea at LB, Heinze in the centre with Fletcher partnering Michael Carrick. That was a move that allowed Carrick to push forward in a deeper role we hadn’t seen in a while Fletch sat back and comfortably took care of Totti, which allowed Giggs Ronaldo and Rooney to sit in behind Alan Smith, who returned for just his second game since his horrific injury 12 months earlier. There was reason for concern amongst fans and pundits alike.

The game kicked off. 5 times had united trailed going into a second leg in Europe, 5 times they had failed. After just 30 seconds united fans had seen what they were craving. Ronaldo picked up the ball and got passed about 4 defenders with step overs, and Alan Smith had already put in a crunching challenge. After just 4 minutes though there were warning signs. Totti picked up the ball outside the area and Van Der Sar struggled to get to his long shot that trickled wide. But the crowd had something to say and when Ronaldo responded to their cries of “he plays on the left” , he picked up the ball, cut inside and layed off a neat pass for Michael Carrick to put united infront. It was the midfielders first goal in any European competition. What followed was dream stuff. A lose ball out of defence from O’Shea was clipped up into the air by Rooney. One touch football followed and Carricks first time ball opened up space for Heinze , whos first time ball found Giggs, and in turn he picked out Smith to fire his first goal of the season. What was at first disbelief turned into ecstasy. Fletchers interception found Ronaldo, and after he rode a few tackles, Smith picked up the ball to release Giggs, who dissected 3 defenders for Rooney to score. United were up 3-0 in 20 minutes and everyone was cheering. Lovely play from Heinze and Giggs eventually set up Ronaldo to pick the ball up on the wing and fire United into a 4-0 lead, his first Champions League goal coming on the stroke of half time.

United started the second half much like they finished the first. After Rooneys shot was well saved, the resulting corner eventually fell to Giggs whose low cross was missed by Smith but Ronaldo was at the back post to secure his second of the night. And after an hour the rout got worse, after Ronaldo cross missed everybody, Heinze picked out Carrick, and with crowd roaring on the Englishmen to have a go from 20 yards, he delivered to perfection. Doni could only stand and watch. A shot even better than his first effort.

Roma found consolation after DeRossi beautifully found the net with his back to goal, finishing off Tottis low cross. It was a superb goal by the Italian World Cup winner, but merely a spark around several classics.

Substitute Patrice Evra, who had just returned from injury completed the nights, his low shot beating Doni and finding the net to round off a perfect evening. From there it was exhibition football. The crowd were in arms, witnessing one of the best nights in European Football, just one of those European nights at Old Trafford.

Man of match: Darren Fletcher. while it was Ronaldo and Carrick who bagged a brace, the influence of Fletcher handling Totti and breaking down many Roma attacks


[right]20 Lounge Credits awarded by Administrator for this post[/right]

Totti was in Flecther's pocket that night. Rare to see a Carrick brace.

Nobody Does it better

Good report, Matt. I remember Giggsy was magical that evening

What a game that was !! I remember i didn't watch the game live because they were showing the Chelsea vs Valencia game so i watched the Chelsea game (no choice) and i turned the game tracker on and i couldn't believe what i was reading !!! Great goals too !! Even Roma's goal was simply magnificent

"The day I came here was a privilege. The day I leave, I feel honoured." - Sir Alex Ferguson

i remember this night so well, they moved us from the corner flag of west lower, to just behind the goal but just above the crossbar height, put it this way, michaels carricks second goal...would have hit me in the face, if there had been no netting!

that night, we jumped on seats as the goals flew in...
hugging strangers lol. i love that feeling at old trafford when after a win or goal or result a stranger hugs you
oh football - bloody hell!

[center]"It will be a very emotional day for me, to play one last time at Old Trafford in front of our amazing fans. I am going to savour every moment and I hope the fans and Manchester United can also share in my special day.” 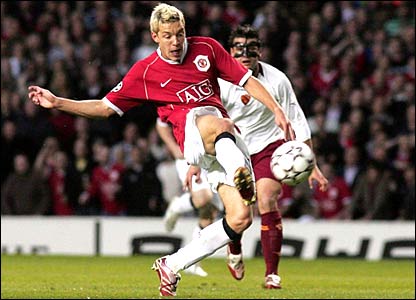 brings back memories of an unforgetable night at Old Trafford!

[center]"It will be a very emotional day for me, to play one last time at Old Trafford in front of our amazing fans. I am going to savour every moment and I hope the fans and Manchester United can also share in my special day.”

Clive on ITV... "The forgotten man is back!"

Peter Drury on Sky Sports "At the Theatre of Dreams, This is beyond their Wildest Dreams"

One of the lasting memories is the way WE SHALL NOT BE MOVED was sung just before half time - they had some awesome shots of the crowd, and Roma looked absolutely stunned

Manchester United - Horrible for my health, wonderful for my heart - since 1987

what a night,seems like a life time ago though

This match still brings tears to my eyes. The best I've seen. Still miss you.

1966 was a great year for English football. Eric was born!

i forgot to say,for me it was probably the best game i have ever seen a team play,it was one unit flowing so sweetly.....

I was looking at that thinking, 'whos the wrestler' The realised it was Chivu

One of the most exiting games ever..

To Be A Man UNITED Supporter IS NOT A Right! .... It is a Privilege.

All times are UTC